Anchored in the “Eternity” theme of the 2020 edition, this masterclass offers participants online both a technical and political approach to the work of the artist Joanie Lemercier, in his presence.

Accompanied by Juliette Bibasse, curator in digital art, this meeting will allow us to approach the artistic process that led the artist to the realization of his work Constellations, but also to discover and understand the new measures and the time he has devoted to the environmental cause in recent years.

“I use technology to shed light on certain issues, and I follow and assist different groups of activists in their direct actions. ”

Joanie Lemercier is interested in non-standard projection surfaces which become his space of expression. He has also recently inscribed his work in an assumed activist approach. This role is increasingly fundamental in his artistic achievements and will be placed at the core of this masterclass.

Within the framework of the Future DiverCities cooperation project, co-financed by the European Union’s Creative Europe program.

Joanie Lemercier (b. 1982) is a French visual artist and environmental activist whose work explores human perception through the manipulation of light in space. Working primarily with light projection and computer programming, Lemercier transforms the appearance of everyday objects and forms, bending reality to his imagination.In recent years, Lemercier has become increasingly concerned with climate change and environmental degradation, lending his projection skills and artistry to activist causes and groups such as Extinction Rebellion as well as developing a new body of work, The Hambach forest and the Technological Sublime which looks at the devastating effects of coal mining on one of Europe’s oldest forests.

He has been working with projected light since 2006 and co-founded the acclaimed visual label AntiVJ in 2008. Represented by a New York based gallery since 2010, Joanie founded his creative studio in Brussels in 2013.
Lemercier has focused his practice on installations and gallery work and has since been exhibited at the China Museum of Digital Art in Beijing, Art Basel Miami, Sundance Film Festival, Espacio Fundación Telefónica in Madrid and collaborated with several sound artists: Murcof, Flying Lotus and JayZ. 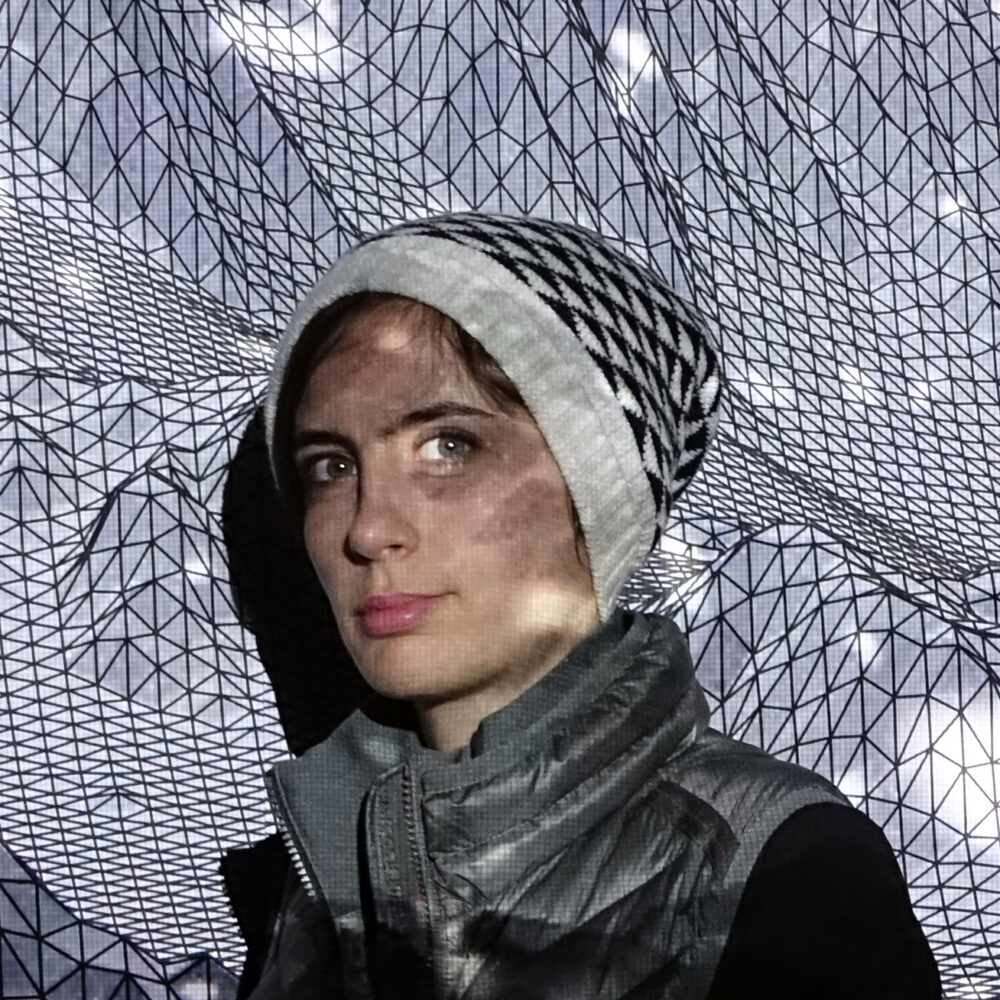 With a background in artistic direction, Juliette has a taste for simple and stripped down aesthetics.
Since 2009, she has been applying her skills to the digital art scene, creating connections and opportunities between artists, festivals and cultural actors.

As an artist’s producer, she collaborates on a wide range of projects : digital art festivals, installations, sculpture, commissions for private events, …
She represented several international artists for their existing projects as well as new creations.
She is now the head of Studio Joanie Lemercier.

Since 2016, she has been working as an independent curator for several festivals and cultural institutions, since 2019, as international curator for STRP festival in Eindhoven.
In 2020 she is curating a new light parcours for the city of Leuven in Belgium.

Based in Belgium since 2013, she has been an active member of The Federation Wallonia-Brussels’ digital arts scene.
In 2019 she co-founded SALOON Brussels, an international network for women working in the art scenes.